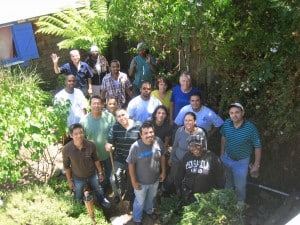 We are a collaborative of educators who teach residents and tradespeople about affordable and simple household water systems that dramatically reduce water use and foster sustainable cultures of water. Through hands-on workshops and presentations, we’ve led thousands of people through greywater system design and construction, and work with policymakers and water districts to develop codes and incentives for greywater, rainwater harvesting, and composting toilets. We believe that decentralized conservation measures can play a critical role in drought resilience, climate adaptation, and the return of healthy stream ecosystems.

Our teaching tools include interactive models of composting toilets and greywater systems, presentations, and design and installation workshops.

In 1999, Laura Allen and Cleo Woelfle-Erskine built a greywater system in their backyard out of concern about their household water use. Their backgrounds in environmental science and permaculture design sparked their interest in water reuse and wastewater treatment using constructed wetlands. They built several prototypes, then self-published a ‘zine called “The Guerrillas Greywater Girls Guide to Water” that combined strategies for conserving and reusing household water with stories of their explorations of California’s water infrastructure. Over the next few years, they taught hands-on workshops in community venues, continued researching and fine-tuning small-scale urban greywater systems, and edited an anthology on strategies for water sustainability from small-scale eco-technologies to global grassroots political movements. The anthology Dam Nation: Dispatches from the Water Underground (Soft Skull, 2007)  brings together an analysis of water’s history with the active fight for its future.

Since 2007 the group has brought these ideas and workshops to a wider audience through conferences, collaborations, and media coverage. Christina Bertea and Andrea Lara, both plumbers by trade, joined to lead hands-on workshops. The group expanded and refined the range of workshops offered, and created educational displays for public events.

As of 2011, The Ecology Center in Berkeley is the fiscal sponsor of Greywater Action.

In 1999 we named ourselves the “Guerrilla Greywater Girls” as a tongue-in-cheek response to a draconian California plumbing code that discouraged the simple, low-tech greywater systems we promote. A few years later we changed our name to the “Greywater Guerrillas”, to reflect the multi-gendered composition of our collaborators. As we worked more closely with government agencies and regulators, and began collaborating with A Single Drop in countries where “guerrillas” has violent implications, we searched for a name that would represent our goals and strategies to a diverse and international audience. In 2009, we chose a new name— Greywater Action- For a Sustainable Water Culture—for our appropriate technology education projects. 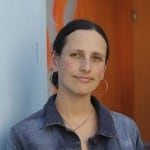 Laura Allen is a founding member of Greywater Action and has spent the past 20 years exploring simple and ecological water solutions. She is the lead author of the San Francisco Graywater Design Guidelines for Outdoor Irrigation, and authored The Water-Wise Home: How to Conserve and Reuse Water in Your Home and Landscape (Storey Press, 2015) and Greywater, Green Landscape (2017). She has a BA in environmental science, a teaching credential, and a master’s degree in education. Laura leads classes and workshops on rainwater harvesting, greywater reuse, and composting toilets. Laura has presented widely on greywater reuse, including at the Water Smart Innovations Conference, Bioneers, California Environmental Health Association conference, and California Landscape Contractors Association conference. She’s participated in state greywater code developments in California and Washington State and is on the technical advisory committee for IAPMO’s Water Efficiency Standard (We-Stand). Laura was featured in an Ask This Old House episode on greywater and was the 2014 recipient of the Silicon Valley Water Conservation Award of Water Champion. 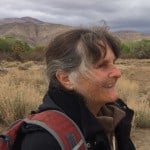 Christina Bertea served a 4 year apprenticeship in Local 159, Plumbers and Steamfitters and was the first woman admitted in the program. She designed and built a passive solar urban infill rammed earth cottage with radiant heat, taught plumbing at AND’s construction education center in West Oakland, which had classes work on Habitat for Humanity houses in East Oakland. She became a contractor in 1996 and has plumbed quite a few “alternative” houses, including straw bale and rammed earth. She is also interested in the spiritual aspects of water, and creates fountains and water features. 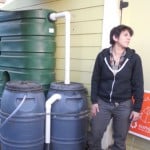 Andrea Lara grew up in the foothills of Northern California, the daughter of a plumber. After studying Neuroscience at Pitzer College, and teaching after-school science programs, she entered the plumbing trade. Witnessing the wanton waste of high end plumbing Andrea decided to put her plumbing skills to better use, and joined the Greywater Action. She’s led workshops and constructed greywater systems in the SF Bay Area, Los Angeles, and San Diego. 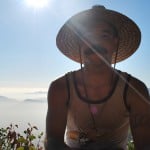 Brian fell in love with water at a young age, surfing and swimming often. He attended Los Angeles Trade Technical Collage, taking classes in Plumbing and Waste Water Treatment and worked as a residential plumber for a few years. In 2010 he traveled to Petaluma to take the Greywater Action’s Installer Course. He returned to Los Angeles and started his own business installing greywater systems and doing yard work without the use of gas powered tools, traveling to jobs by bicycle. Brian Munson is from Los Angeles and currently lives in the Bay Area and installs greywater/rainwater systems with the company WaterSprout. 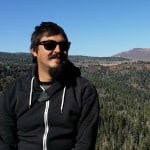 Cris is a bilingual instructor and was part of the pilot program for Spanish workshops with Greywater Action.  He holds a Bachelor of Arts degree in Environmental Science and Policy and a minor in Geography from Cal State Long Beach and is currently the stewardship manager for the Palos Verdes Peninsula Land Conservancy implementing all restoration projects.  Cris has a strong background in habitat restoration, field botany and permaculture design.  His interests dwell in all things regenerative and he teaches classes with various organizations including the UC’s Master Gardener Program, Treepeoples citizen arborist program and various school districts.  His goals are to implement greywater systems throughout the Los Angeles area and distribute information to under-served communities. 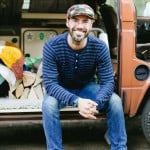 Sergio has over 15 years experience working in construction. After managing an office, with a crew of 30+ contractors, he decided to finally move on to a more ecologically minded lifestyle. In early 2014 he began installing greywater systems and while working for Greywater Corps started advocating for their widespread implementation. He holds several certifications and is trained in greywater systems installation, water harvesting, permaculture, natural building, native landscaping, web design, and has a strong focus on appropriate use of resources. Sergio is from Argentina and currently lives in Port Townsend, Washington, where he spends most of his free time talking about sustainability. 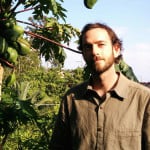 Ty specializes in backyard orchard care, from building the soil life to pruning the canopy, and the irrigation systems in between. He has taught ecological workshops on permaculture design, greywater, earthen construction, fermentation, and kids classes on making compost with worms. Ty is a certified arborist (#WE-10547-A), greywater installer (Greywater Action), rainwater harvester (Watershed Management Group), and has his horticulture certificate from Long Beach City College. 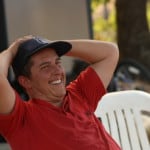 Cleo holds a B.S. in Interdisciplinary Geosciences from the University of Montana and several certificates in permaculture design. Since 1996, Cleo has innovated water sustainability strategy through stream and wetland restoration, rainwater harvesting, ecological sanitation, and urban gardening in California, New Mexico, and Montana. His writing has appeared in ColorLines, High Country News, LiP, the Environmental Justice Coalition for Water’s policy report Thirsty for Justice: A People’s Blueprint for California Water; That’s Revolting: Queer Strategies for Resisting Assimilation; and other publications. A co-editor of Dam Nation, Cleo also developed an environmental justice curriculum for Heron’s Head Park (San Francisco), and self-published the anthology, Urban Wilds: Gardeners’ Stories of the Struggle for Land and Justice, and the children’s book Sink or Swim: A History of Sausal Creek. His research interests include how to promote community involvement and tribal sovereignty in ecological restoration projects, the role of constructed and natural wetlands in small-scale water systems, and the geomorphic and ecological effects of dam removal.