The modern-day sewer system has failed. In the United States, our clean water infrastructure was rated a D from the American Society of Civil Engineers (2013). Sewage overflows cause beach closures, spread illnesses, and contaminate the environment.  And this is happening in places that actually have sewage treatment… most of the world does not and untreated sewage more quickly contaminates the environment, and is the source of illness and death for millions of people, a child dies every 21 seconds as a result of inadequate sanitation (UNICEF, WHO 2009)

Fortunately, we don’t need costly sewage plants or septic systems to render human waste into a harmless substance that, instead of being a problem, is a solution to problems of water shortages, water pollution, and reliance on chemical fertilizers. This is ecological sanitation, taking care of our human sanitation needs in a way that is helpful, rather than harmful, to the environment.

Through nutrient cycles, we are intrinsically and symbiotically connected to plants: we eat plant foods, and plants turn the nutrients we excrete back into food. This is known as a closed loop system. In the industrial world, most such natural cycles have long been broken. Ecological sanitation closes the loop.

Composting and dry toilets use natural processes to turn human excreta into a valuable soil amendment. They typically use no water, or very little water in commercial-scale applications. Potential pathogens are killed by a variety of processes, including die-off and predation by other microorganisms. To have a well-functioning composting toilet the following should be kept in mind. 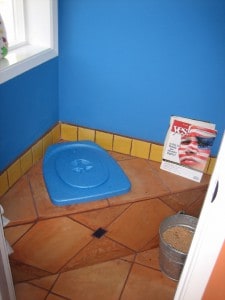 On a broader scale, ecological sanitation manages sewage by drastically reducing water consumption through conservation, rainwater catchment, and on-site greywater and stormwater recycling. Ecological toilets give eating and pooping a new importance. To take care of our bodies and their functions we no longer need to harm the earth. Instead of participating in a system that wastes precious resources, we can be making rich humus and fertilizer each day. We can live our lives knowing that we contribute valuable nutrients to the earth, that we use them in our yards and community gardens and help plants grow.

Composting toilets are rooted in the history of cultures around the world. Traditional Yemeni apartment buildings collect feces, which are dried and burned as fuel. In nineteenth century London “earthen closets” safely processed feces to remove pathogens and create fertilizer. “Night soil” was collected from cities and towns in many Asian countries to be used as fertilizer on fields.

There are several options for methods and styles of composting toilets.

Some manufactured composting toilets are certified by NSF, which makes them easier to be accepted by health and building departments. Large manufactured toilets, like Clivus Multrum and Phoenix brands, can be a good option for people who can afford them and don’t want to be involved in the handling process. Small, self-contained composting toilets like the Sun-Mar or Biolet have a seat right on top of a compost container. These are designed for seasonal or cabin use and cannot handle the quantity of feces a household produces on a daily basis. Many people make the mistake of buying one because they are comparatively inexpensive and space-efficient. However, they function poorly if overloaded. If the feces is not composting fully, the material can still be removed and further composted elsewhere. Toilets such as the Separette Villa and Nature’s Head (which includes urine diversion) collect the material in a small chamber, which then must be emptied outside into a larger composting container to finish the process.

The do-it-yourself ecological toilet is a perfect choice if you don’t want to spend lots of money, and you’re able to be more involved in the process–like by emptying buckets once a week. If you need a permit for your toilet, for example, you are building a new home and your state allows composting toilets instead of a septic system, a site built toilet is most likely not an option (though these laws are slowly changing). Think you’ll be breaking the law by composting your poop? Not necessarily. If you also have a flush toilet, hooked up to an approved sewer or septic system, you are not technically breaking any laws by having a composting toilet. Many states do not have codes regarding composting toilets, nor are their regulations for backyard composting. Site-built toilets look very different from one another, but they all function on the same basic principles as the manufactured types. Feces are typically stored for a minimum of one year before being used as fertilizer.

The sawdust toilet is a common DIY option and can be implemented in most situations, even for people living in an apartment. It is low cost, easy to use and maintain, and produces lots of rich compost. Watch a video or view step-by-step instructions here.

If you make your own toilet, you have the option of including a urine diverting insert to reduce the volume of material to manage and reduce the amount of sawdust needed. Urine diversion can address problems associated with too much liquid and odor from a poorly functioning toilet. They also facilitate easy collection of urine, a valuable nitrogen fertilizer. If your urine divering toilet collects urine, you will have two containers to manage (urine and feces). Since urine diverting toilets take a little getting used to, they are not typically a good option for public toilets (if sawdust or poop goes into the urine diversion portion the toilet clogs and is not usable until cleaned.)

In the past, home-built toilets were difficult (or impossible) to get permits for. Times are changing. Arizona is working on a pilot project to create site-built designs approved by the Department of Ecology. Oregon’s REACH code includes guidelines for site-built toilets.

The Arbor Loo, pioneered by Peter Morgan, a simple composting toilet with a portable slab, seat, and shelter, is gaining popularity in Zimbabwe and throughout Africa. A shallow pit (three to five feet deep) is dug in the ground with a protective lining that prevents the pit from collapsing. A movable shelter is located on top of the pit. Wood ash and soil are added after each use to help the decomposition process. When the pit is three quarters full, the slab and shelter are moved and mounted over another shallow pit. The full pit is topped off with six inches of soil, a young tree is planted over the contents, and the cycle is repeated. Fruit trees, like citrus, peach, mango, avocado, mulberry, guava, and papaya trees have all grown vigorously atop Arbor Loos, fostering local food security. Read about how to build one here. 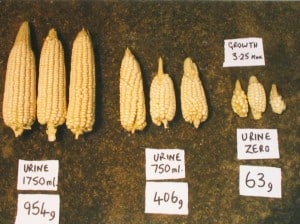 Results of urine fertilizer (photo by Peter Morgan, Aquamor).Collecting urine, that magical yellow liquid we excrete from our bodies several times a day, is an easy way to recycle human nutrients. Urine contains most of the nitrogen, phosphorus and potassium we release. These nutrients are the major components of chemical fertilizers, and urine is an amazing plant fertilizer! It is typically sterile, and, if separated from feces, can be easily and safely reused. Urine collection can be as simple as peeing in a jar or installing a urinal or urine-diverting dry or composting toilet.

The urine your own household produces is safe to use without treatment. To collect urine in your house all you need is a two-to-five gallon jug or bucket. It must be fitted with a tight cover to prevent oxygen from turning the urine’s nitrogen into ammonia, which smells bad and causes some nitrogen loss.

Though urine is usually sterile, it can become contaminated if it comes into contact with feces. There are also a few diseases that can be transmitted through urine: leptospirosis and schistosomiasis (bilharzia), which are found almost exclusively in tropical aquatic environments; and typhoid, which is inactivated shortly after excretion. If urine has been contaminated with feces, or if it came from strangers who may carry these diseases, urine should be purified before it is used.

Urine is easy to purify — all you have to do is wait. Urine leaves the body fairly acidic and then the pH increases rapidly until pathogens are unable to survive. This process takes from fifteen days in warmer Mexico to over six months in the chilly Scandinavian winter.

How to use urine: 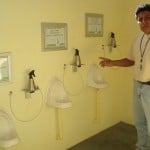 In Sweden, researchers from the EcoSanRes Programme, funded by the Swedish International Development Cooperation Agency, have experimented with collecting urine from apartment buildings and storing it in large underground tanks for six months. The miracle fertilizer is then pumped out into container trucks and delivered to nearby farms. The Swedish researchers have concluded that urine is a high-quality plant fertilizer.

Ecological sanitation group Sarar Tranformacion, supports projects such as this public restroom collecting urine from a sports field in Cuernavaca, Mexico. The urine is collected and used for fertilizer in local agricultural fields. Urine is stored and then used to fertilize crops. It is usually diluted between 1:3 and 1:5 parts urine to water.

In the United States, the first large-scale urine collection project is underway. The Rich Earth Institute has been collecting urine from over 170 volunteer participants around Brattleboro, Vermont. After sanitizing the urine, they’re applying it to farmland growing hay. They are studying the effect of urine fertilizer on the quantity and quality of the hay, and on the properties of the soil. 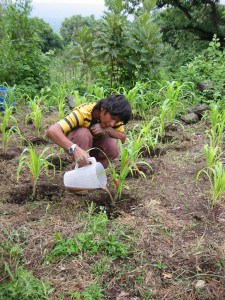 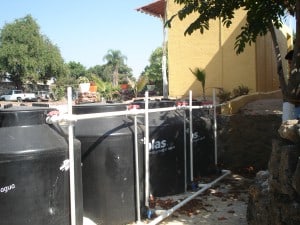 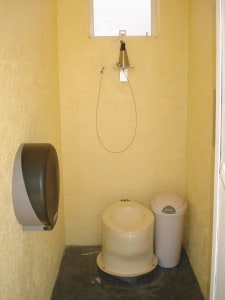 Women’s urinal (photo from SARAR)Urine is stored and then used to fertilize crops. It is usually diluted between 1:3 and 1:5 parts urine to water.

China, long familiar with the collection of night soil for fertilizer, has begun to standardize urban ecological sanitation systems and apply ecological sanitation principles on a large-scale. In 2007, in the drought-ridden North, an “eco city” was built with modern urine-diverting toilets and treating household. The urine and feces — as well as kitchen compost — are collected from each home and processed in an ecostation, much the same way garbage and recycling are collected in parts of the United States. Large-scale ecological sanitation based on this model could be integrated into any urban environment. Unfortunately this project was dismantled, due to faulty construction work, lack of oversight on the installation, and an economic upturn that attracted residents with different values than who the project was originally designed for. Read more about it here.

Festivals are a place where large-scale composting toilets are thriving. The Natural Event, an Australian company, has been managing the pee and poo from thousands of music festival attendees across Australia, New Zealand, and in the UK since 2000.

Although North America doesn’t have a sewerless city (yet), we do have a few sewerless buildings. One example is the public restroom at the Bronx Zoo in New York City. Faced with an exorbitantly expensive sewer connection they decided to go sewerless, installing large Clivus Multrum composting toilets underneath the bathroom and using all greywater on the landscape. In downtown Seattle, the Bullitt Center, a six story, 50,000 square foot building is outfitted with Phoenix composting toilets. The San Francisco Public Utility Commission’s new office building in downtown San Francisco uses a living machine to treat wastewater, the treated wastewater is used to flush toilets in the building. This system, along with a rainwater catchment system, enables the building to consume 60% less water than similarly sized buildings. See the resource page for more info on these types of projects.