(Text on this page is an excerpt from © The Water Wise Home: How to Conserve, Capture, and Reuse Water in Your Home and Landscape, by Laura Allen ) 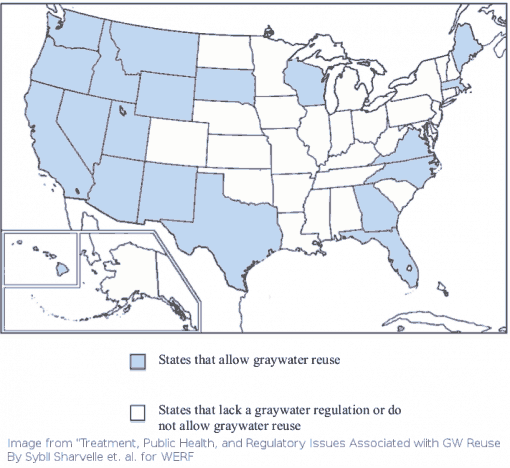 Understanding your local greywater codes is important for a few reasons. If your project requires a permit, understanding the perspective of your regulatory agency will help you work together. If you’re working on policy change, you must figure out how to have a functional code that simultaneously addresses concerns of health and safety officials….

…Historically, plumbing codes did not distinguish between greywater and blackwater (from toilets). Greywater was required to be collected together with blackwater and sent to the sewer or septic systems, and reusing greywater was illegal. This began to change in the early 1990s when drought-prone California realized this potential source of irrigation water was being wasted. The state plumbing code changed to allow legal reuse. Greywater advocates from that time will tell you how this code, though a positive first step, was practically useless. It treated greywater like septic water, requiring a small septic-type system to dispose of it deep underground (with a tank and gravel-filled leach lines). People interested in irrigating with greywater still had to build illegal systems. California alone had an estimated 1.7 million unpermitted systems. States like Arizona, which followed California’s example code, had a similar experience.

In 1998 greywater pioneer Val Little, director of Water Conservation Alliance of Southern Arizona (Water CASA), conducted a survey in southern Arizona and found that 13 percent of residents used greywater, all illegally. The overly restrictive code prevented her from teaching people how to reuse greywater properly, so she worked to change the regulations. The end result was a performance-based code that outlines health and safety requirements. Residential greywater systems that follow the guidelines are legal — without permits, fees, or inspections — so long as the system produces less than 400 gallons per day. Now water departments, NGOs like Water CASA, and the state environmental health department can offer advice, brochures, classes, and financial incentives to encourage safe, legal grey­water reuse. Arizona’s success was emulated by other states, including New Mexico and Wyoming. Eventually (in 2009), California upgraded the state code to remove some permitting barriers for irrigation systems. 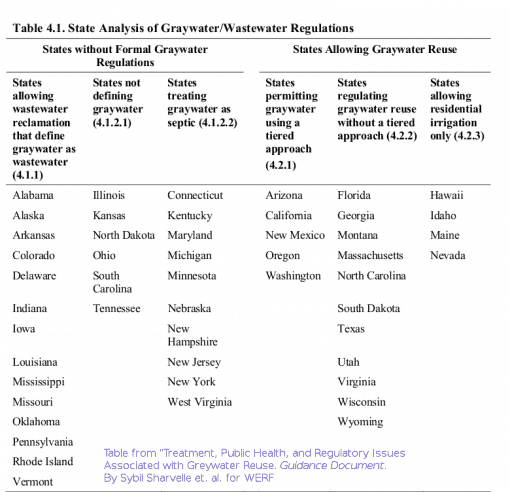 Greywater codes still don’t exist in many parts of the country. At the time of writing, some states regulate greywater like septic water and require a septic disposal system for it. Others, like West Virginia and Massachusetts, allow greywater systems only in houses with a composting toilet. Florida bans outdoor greywater use but allows it for flushing toilets. Georgia allows you to carry greywater in buckets to the plants, but you can’t get a permit to build a simple greywater irrigation system. Washington state’s code allows very small systems built without a permit (following performance guidelines), but all other systems have quite stringent requirements. Oregon requires an annual permit fee.

Performance-based codes describe health and safety requirements for greywater systems. Systems that meet the requirements are legal; those that don’t are not. Performance-based codes don’t typically require inspections or fees, yet provide legal grounds for a city to take action against a problem system. For example, “no pooling or runoff” is a common guideline that prevents exposure to greywater, but many codes don’t specify how to meet this requirement. Performance-based codes are written in simple, straightforward language. States and local jurisdictions can provide further guidance, such as how to size a system to avoid pooling and runoff, but the
more specific details are left out of the code.

Prescriptive codes specify exactly how to build a greywater system including what materials and parts can be used. Instead of stating “No pooling or runoff allowed,” they may estimate greywater production based on number of bedrooms in the house and size the irrigation area based on soil type. A detailed code that spells out how to construct a greywater system will result in safer, better-built systems, right? Unfortunately, that’s not the case. Greywater systems are complex; they interact with the living world of soils and plants, and are influenced by water-use habits, fixtures, climate, and physical layout of the house and landscape. Unless the code considers all these variables (and in fact it never does), it results in overly restrictive requirements, adding unnecessary cost, or creates an inefficient irrigation system. When a code is out of touch with reality, people ignore it and build illegal systems, with no guidance. After all, since it’s common sense to reuse the water we already have, why should it be difficult to get a permit, or the fees be expensive?

Wouldn’t it be great if there were just one code for the whole country, so each state didn’t have to reinvent the wheel around greywater law? The International Association of Plumbing and Mechanical Officials (IAPMO) writes codes that are adopted across the nation, and it has a new one on greywater (find it in the Uniform Plumbing Code). Unfortunately, this UPC code isn’t very good. States who adopt it will need to alter it — like California did for its 2013 plumbing code — or risk minimal compliance from the public. The International Code Council (ICC) also writes codes adopted by many states; its greywater code, found in the International Plumbing Code (IPC), is even worse than the UPC. (States that use the IPC should write their own code instead of adopting the greywater chapter.)

National standards for indoor reuse systems are being developed. NSF International recently released water quality guidelines as part of their standard for nonpotable indoor reuse (toilet flushing). NSF 350: Onsite Residential and Commercial Water Reuse Treatment Systems is, according to NSF, “a revolutionary standard that sets clear, rigid, yet realistic guidelines for water reuse treatment systems.” By meeting these testing requirements and receiving certification, companies (who can afford the expensive certification) should find it easier to gain permits, a positive step for indoor reuse and large-scale commercial greywater systems.

Text on this page is an excerpt from © The Water Wise Home: How to Conserve, Capture, and Reuse Water in Your Home and Landscape, by Laura Allen.