Greywater from the kitchen sink contains grease and food particles, which can cause clogging and slow infiltration into the soil. After years of sometimes foul-smelling experimentation, greywater pioneers have concluded that the best way to trap grease and food particles and create habitat for decomposers is with woodchips in a mulch basin: this is an in-ground filter where worms and soil organisms can access the greywater. However, in some situations such as filtering greywater before a constructed wetland, a woodchip biofilter can be employed to capture grease and food particles. 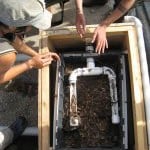 Assembling a woodchip biofilter to trap grease and food particles.

A woodchip biofilter is an open-topped box filled with woodchips with a drain at the bottom that traps grease and food particles in kitchen sink water. Food particles and greases are filtered out by the chips’ large surface area and rough edges so that the water exiting at the bottom has considerably fewer solids in it. That water can then be sent on to a constructed wetland without clogging it as quickly as unfiltered greywater. The woodchips in the biofilter require replacing every few months to prevent the biofilter from clogging.

A mulch basin is, in effect, a giant woodchip biofilter in the ground, readily colonized by microbes, earthworms, and arthropods. Maintenance is simple–when infiltration slows, shovel the decomposing chips into the compost, and throw a few buckets full of woodchips into the basin once a year. If you want a low maintenance system, the mulch basin is the way to go.

These biofilters, which are essentially woodchips in a box or bucket with a drain on the bottom, are needed when a kitchen sink drains into a wetland, but do require regular maintenance for them to fuction properly. Biofilter containers should be easy to remove, dump into a barrel or compost pile, and replace.  But even when maintenance is simple, Laura Allen notes many examples–including her own house–where un-maintained woodchip filters clog and overflow. “It’s so gross. Maybe you’ll change the woodchips once or twice, but after a few years you won’t empty the filter until stinking greywater’s running down the sides. I shut my old system down for months, and finally ditched the filter and wetland and replaced it with a branched drain system with mulch basins in the ground. This worked so much better and is still functioning years later, she says. With that caveat, read on. 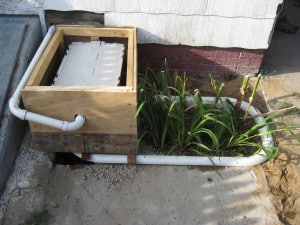 Biofilters work best when greywater is distributed evenly across the surface of the woodchips. The capped and perforated 1 1/2″ PVC pipes spill evenly along their length.
The woodchips are contained in a heavy duty plastic storage box (4.5 gallon capacity) that acts as a surge tank to slow the flow of water into the wetland. 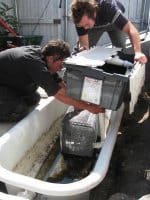 This heavy-duty plastic box drains via a 1 1/4″ sink drain assembly. The inflow pipe connects to the biofilter with a compression fitting for easy removal. The 1 1/4″ drain pipe sleeves into the 1 1/2″ pipe that enters the infiltrator inside the constructed wetland.

Scott Kellogg and Stacy Pettigrew from the Rhizome Collective, created a woodchip biofilter to grow chicken food. They filled an old sink with woodchips and placed it under their kitchen sink drainpipe, inside their chicken yard. Kitchen sink water flowed through the chips, leaving food chunks and grease were left behind. Chickens ate food particles in the upper woodchip layers, and worms, centipedes, ants, bacteria, and other soil critters decomposed food particles further down. When the drainage slowed, Scott or Stacey scooped and replaced out the top layer of woodchips. But rather than tossing the chips in the compost bin, they dumped them into a 55-gallon drum with holes drilled in the bottom. Bugs reproduced prolifically in the drum, and, after the woodchips decomposed, provided high-protein food for the chickens.